Life never really stands still for me, although I confess that I actually enjoy being still and doing very little.  So, I find myself sitting in a cafe in Revelstoke (BC, Canada) taking a break from the midst of a pretty intense 3 month course (run by Yamnuska Mountain Adventures) on all things mountain!

It’s really the first time that I’ve felt clear enough to start writing about this rather amazing skills building course.  It’s been a dream of mine for quite some time to be in big mountains.  Rather, it’s been a dream to make them a more integral part of my down time.  The Canadian wilderness is empty, for the most part.  And there lies the appeal.  It’s not just about being in the mountains, it’s about being alone in the mountains.  Having said that, this course has 11 other people on it, but for the most part (with the exception of the guides) we find ourselves in the midst of large tracts of isolated beauty.

We wasted no time in getting stuck into things.  We briefly sat in a classroom to introduce ourselves and get an idea of who we’d be learning from, and a little bit about each other.  No sooner had we had the chance to familiarise ourselves with the basics we found ourselves knee deep in snow looking upwards at a wall of ice, a lot more intimidating than the WI1 which we’d conquered to get there… 😛  The Junkyards, a local haunt for Canmore residents and a easy introduction to ice climbing, was a great way to get to grips with finding our balance on crampons, as well as using ice axes.

After a day of theory for our AST-1 (Avalanche Skills Training) we were off to the Ramparts Hostel (off the Icefields Parkway) to spend 5 days learning more about climbing on ice.  It was spectacular.  Cold, dark mornings, and increasingly early starts had us wearily climbing out of bed to make breakfast or prepare gear as promptly as 4:30am… the “fresh” (-20 ºC) embracing us with a sharp chill to our lungs as we walked into the “morning” air.  Breakfasts and gear packs were a regimented affair thanks to the keen eye for detail and need for efficiency of our lead guide Karl, an astute, insightful, and sharply funny guy.  Most days involved a decent hike of 2 to 5km to the foot of the climbs, whose names reflected either dark humour (But my Daddy’s a Psycho) , the literal (Balfour falls), the descriptive (Weeping Wall), or the romantic (Shades of Beauty). 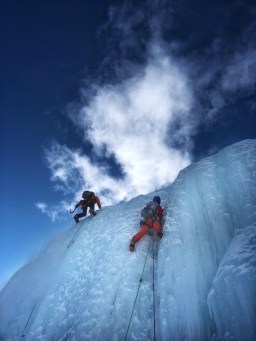 As the week progressed, so did the complexity of the tasks, and the difficulty of the climbs.  Having started with WI3 climbs we finished with a WI4 (Shades of Beauty).  Having never climbed on ice before I found it tricky to keep up with the information and getting enough time on the ice to practice what we had just learned.  It was most painfully clear that getting a solid stance, with crampons in the ice and legs evenly spread either side of one’s shoulders, greatly reduced fatigue and getting “pumped”.  The cold air, and or wet hands, also led to the entertainingly named but unpleasantly experienced “screaming barfies”.  The nauseating intense burning sensation of the feeling returning to your fingers having had them get way too cold from gripping a little too tightly to ice axes (something that comes all to naturally when suspended from a rope 10’s of meters up a solid sheet of ice attached only by a rope and standing only on two small spikes of metal attached to your feet… no big deal).

The week was coming to a close all too soon.  Our first experience of one mountaineering skill was exhilarating, exhausting, and immensely satisfying.  The guides managed to bring the best out of us, despite the wide range of skill levels.  Providing gentle encouragement were necessary, but mainly getting a rise out of everyone at any possible opportunity.  Oh how we laughed…

It was hard to say which of the moments stood out the most, but it was certainly my attempt on the final 30m pitch on the Shades of Beauty climb.  A WI4 with views down the Icefields Parkway.  The clear, sunny day did little to reassure me at the time, particularly when I clung on for what felt like dear life.  The last one up I had to clean the ice screws.  Of course, being so focused on simply getting to the end I often climbed above them making life difficult for myself.  I have to say the stunning views were frequently lost on me as I realised I had to down climb to clip out of the draws and remove the screws.  As I clawed my way over the final bulge in the ice to the gentle lip that lead up to the last anchor I was more than pleased to have completed what was most certainly the hardest climb of the week, ending the tough, tiring week on a high.

Next stop on the great adventure, Healy Pass.  Pristine meadows near Sunshine Ski Resort, and the topic of the next story.

One thought on “Learning new tricks…”

This site uses Akismet to reduce spam. Learn how your comment data is processed.